Back to Boomer Reporting Corps Homepage 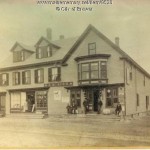 Growing up in the 1940-50’s, we were privileged to live in a self- sustaining community: employment at Eastern Manufacturing Paper Mill, public bus transportation (previous trolley service),

A Pool Hall, Cap Morrill’s Pub, Laura’s Lunch & Pub (Mundy) and Southworth’s Pub, Hitchcock’s Store next to Southworth’s (later this was where Ken Taylor and Norma Bell, his sister, started their antique business – years later they individually owned their own much larger antique shops and did auctions-Wilson Street, Brewer). Little’s Doughnut Shop on Stone Street and Nissen’s Bakery was on Abbot Street and the Gulf Oil’s office was on South Main in Cove area just before Oak Hill Cemetery, The Plug Mill, the Box Factory and Rolnick’s Junk Yard were on upper South Main Street

Near King’s Court was DON’S Package Store beside Graves Grill (had jukebox), Armory on corner of Oak Street, an Army Armory across from intersection of Elm /Brewer Streets, Lacrosse Hotel on King’s Court just above the railroad tracks, (later was a furniture manufacturing business), Bunt King’s Oil Delivery and road tarring next to Harnum’s Restaurant, a Furniture Store corner of Century Street, Looke’s Hardware Store (before tracks going up the hill to Orrington across from turn around for public buses ), later Watson’s Hardware Store in closed Sargent School, (DeMoupied’s Stanley’s Lunch near Eastern Manufacturing’s Ball Field.

A new brick building for Campbell’s Bakery on South Main Street across from Pendleton Street (they later downsized to corner of Wilson /Main Streets, then Center Street), later the Campbell building was occupied by Hanson’s Ski Shop then a pizza shop that caught fire and burned and building demolished, Eastern’s Guest House on Ayer Street, our own physician Dr. Albert Todd (who made house calls) lived in house with his office next to the small private Adams’ Hospital on South Main Street. Fresh milk delivered by our milkman Allie King (Brewer Street) with pony and wagon and later wagon pulled by a blind donkey, whose past memory with sight enabled him to accurately stop at appropriate homes and stations.

Large families with fathers working and mothers staying home with the children struggled to provide the necessary staff of life items. World War II affected the economy with certain items rationed and men going off to war, leaving the wives to care for the children and run the households. 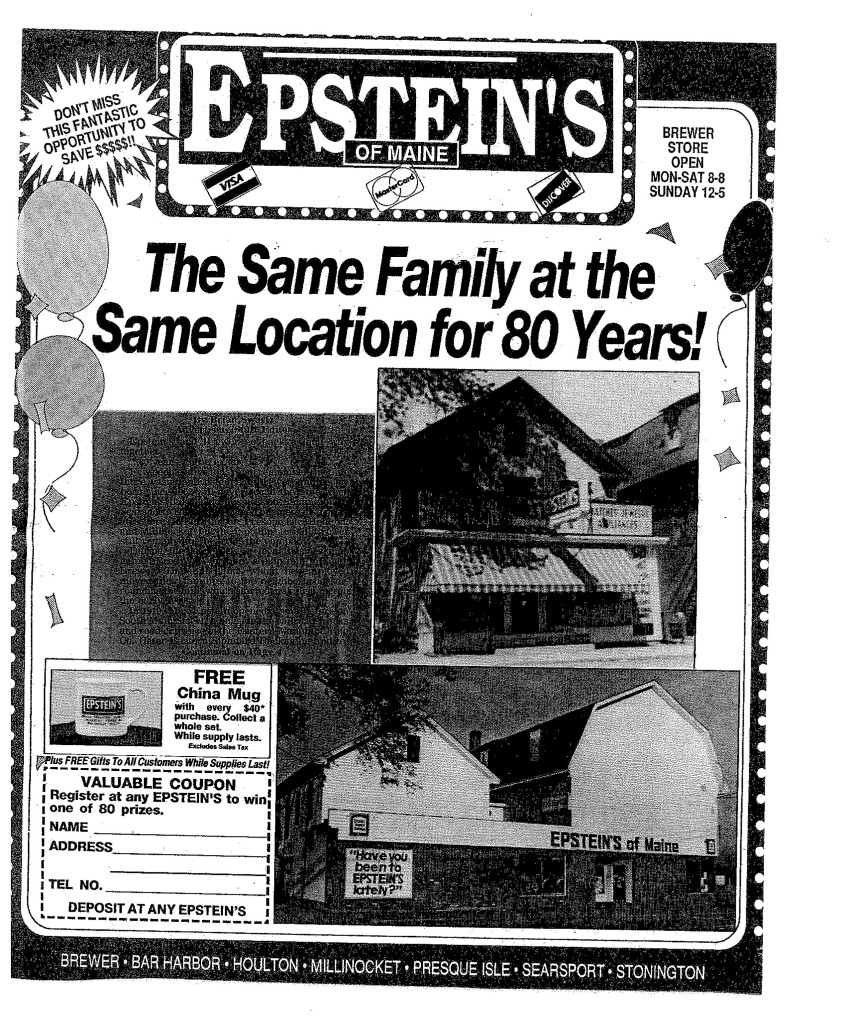 Those in business had their hardships, too, as not everyone paid their bills on time. One of the most important local businesses was Epstein’s Clothing Store. Mill workers purchased their work clothes, shoes and boots; previous to fall school opening, families bought their children’s new clothing and footwear; many families had charge accounts and paid weekly, unfortunately some paid very small amounts and some not at all.

In 1910 Max Epstein opened a small clothing store near entrance to the paper mill, Eastern Manufacturing. The population of Brewer was 5,667 and the paper mill had been operating for twenty years. (In the late 1880’s Fred Ayer operated a saw mill and later built a pulp mill; the new employees moved their families to the neighborhood and began to make paper in the early 1900’s}.

In 1920 Max’s teenage son Harry (born 1905) started working in the family business. In 1938 when Max died, Harry took over the store. He knew the customers by name and considered them friends. As the business grew, so did the need for more space and gradually the adjacent business buildings were added to the main store with an alley converted into the main building and eventually the small store encompassed the entire corner of what had been small shops.

Harry, his wife Ruth and later son-in-law Stan and daughter Ellie were a very important part of South Brewer’s community and economics. They worked long hours, giving generously to the community, and providing necessary clothing for families at reasonable prices, granting charge accounts (credit cards were not heard of then) and quietly did charitable contributions to many. I remember Harry always with a smile, chewing on his cigar, enthusiastically ready to wait on the customers with the latest clothing and footwear items.

Harry was an avid basketball fan and owned the Bangor Five Aces, a semi-pro basketball team that played home teams throughout the state. He also served as a Bail Commissioner. He served as president of the Beth Israel Synagogue for thirty years.

In 1959 his son- in-law Stan Israel joined the family business and within fifteen years the business volume increased ten times and the number of stores became six: Brewer, Bar Harbor, Houlton, Millinocket, Presque Isle and Stonington. Stan became active in civic organizations and with the store’s advertising promoted Brewer. He helped form the Brewer Business Council and the Brewer Chamber of Commerce in the 1960’s, later serving on the board of directors Greater Bangor Chamber of Commerce.

In 1980 Harry’s daughter Ellie, wife of Stan, began working at the store. They had four children and she was an elementary teacher in the Bangor School System; when the children were young, she was a pre-school teacher. Musically talented, she sang in the Bangor Community Theater productions, Community Chorus and Church Choirs.

In 1987, Harry died; up to the last few years of his life, Harry came to work: when too weak to wait on customers, he sat near the checkout area to greet the customers. His passing was mourned by many generations whose families had not only been customers, but also friends. The area communities lost a friend and important entrepreneur.

In 1991 a fourth generation entered the business, Melanie Israel, Stan and Ellie’s third daughter and eagerly learned all parts of the business. In their expansion they acquired the South Brewer Grammar School building across the street. After the store closed, they opened an Antique Mall there with individual dealers renting space.

In 1997 economics and times changed: family businesses, banking, etc. and time for the beloved Epstein’s of 87 years to bid farewell. Everyone who grew up in South Brewer, Brewer and surrounding communities will always remember Epstein’s Clothing Store and its kindness in allowing charge accounts to pay according to their means: the mill workers, families, especially the children shopping for their new clothes and footwear, but most of all Harry and his family as best friends and almost members of their families. The present world with big box stores can never know this mutual benefit of bonding and connecting to the community as we shared back then.

Credit to Ellie Epstein Israel for her help and facts